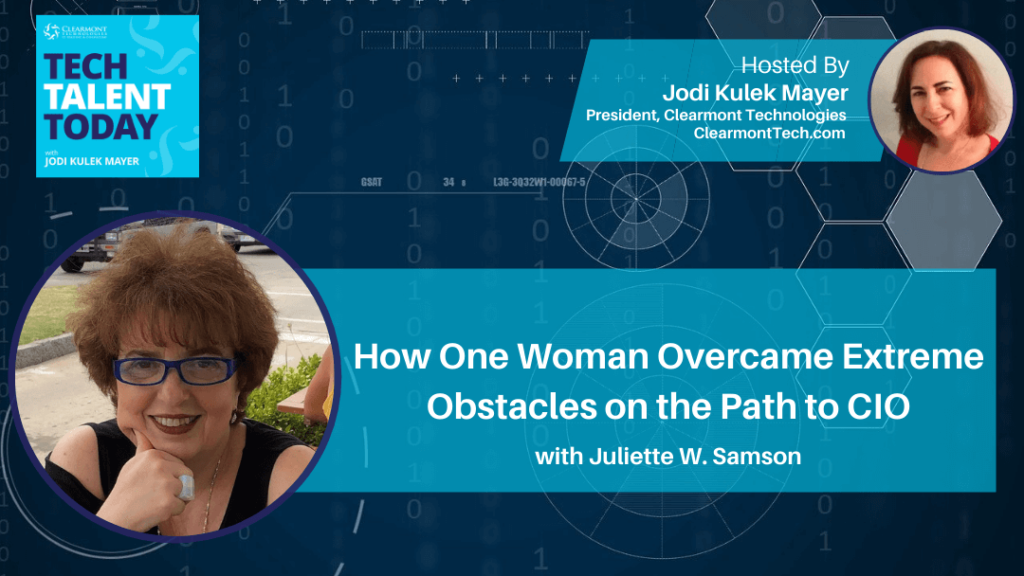 In this episode of Tech Talent Today, I’m thrilled to be joined by Juliette W. Samson, CIO and VP of Supply Chain at CPG (Consumer Packaged Goods) – Food and Beverage. She’s responsible for implementing new technologies and optimizing the supply chain process to increase speed, service, and profitability. Juliette is a graduate of Cornell and Columbia Universities and speaks four languages. She is a determined mom who left no stone unturned when she had to find her daughter a kidney. You won’t want to miss Juliette’s amazing story of her journey of balancing her role as a mother with her journey into leadership in the technical world.

Juliette W. Samson was born in Eastern Europe, where having women in science was normal. Both her parents were physicists. When they moved to America, her mother had difficulty finding a job because she was overqualified for almost anything available. For Juliette, it was natural to become an engineer. When she started her career at Western Electric in manufacturing, her male supervisor questioned her about why she became an engineer. Her response was to ask why he became an engineer. When he responded that it was because he liked it, she caught him off guard by saying she did as well!

Choosing the right place for your career

When Juliette started her career, she chose to join AT&T because it was large enough for her to move around and learn everything. The benefit of a large company is that it provides many opportunities to learn different things which will help you with future positions. Juliette emphasizes the advantage of understanding your goals early in your career. That’s a hard thing to do, but it’s worth taking the time to dwell on the future. This sort of planning allows you to map out how to get where you want to go.

While at AT&T, Juliette was thrown a curveball; the telecom industry had started to shrink. With two young children, her income needed to be dependable, so she needed to choose between staying in the same field or trying something different. She decided to go into IT because she felt it was a close match to the telecom industry. Also, no matter the company, IT will be necessary. While searching for IT positions, Juliette was interviewed by Merrill Lynch for a financial role. The interviewer was very interested in how she was going to manage the transition of industries. She said she’s managed quite a lot of issues in her life, both personal and professional, and there’s nothing she can’t do; she just needs a chance. She got the job and really enjoyed her position there. She continued in the role for a year when Pfizer asked her to join the company. Because of Pfizer’s impact in the community and the world, she accepted the offer.

Using your career to impact the world

Juliette has been a CIO for seven years, however, she didn’t set out in her career to acquire a title. Her goal was to utilize technology and enable processes that affect people’s jobs and lives positively. That’s why she became an engineer. She was particular in the roles that she accepted by choosing companies that positively impacted the world. She advises everyone to take the assignments no one wants. If you take something difficult, you’ll build your career while accomplishing things no one else could.

Juliette W. Samson emphasizes the advantage of understanding your goals early in your career #goals #career Click To Tweet